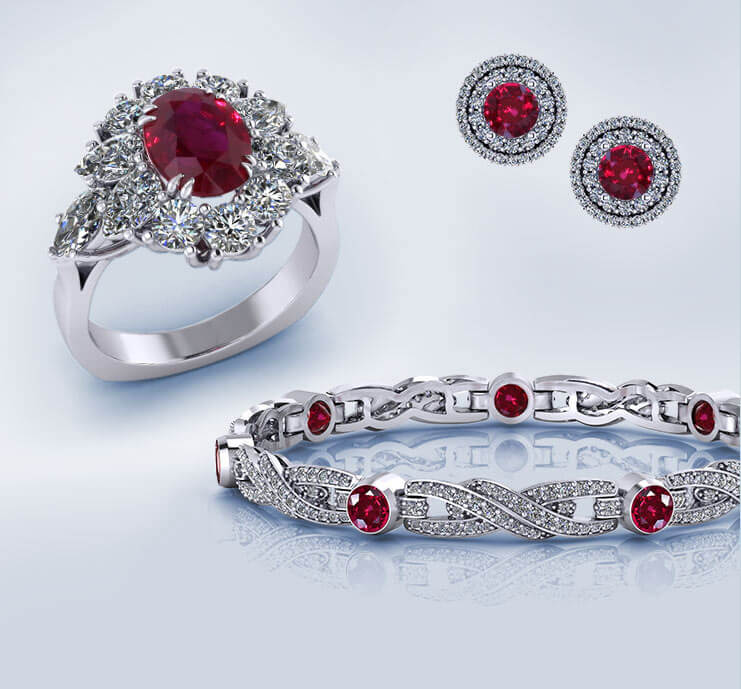 Design Your Own Ruby Jewelry

The Ruby is a symbol of love, protection, and good fortune. Known for its internal red glow, like a flame that will never extinguish, the gift of ruby jewelry is the ultimate expression of passion and eternal love. The undeniable beauty and mystical lore of this rare stone position it among the most coveted gems.

First discovered over 2,500 years ago, ruby is widely known as July’s birthstone. It is also a celebratory 40th Anniversary gift. Renowned as one of the five cardinal gems, this precious jewel antiquated back to ceremonial and religious use through history. Once worn as a talisman over the heart, the blood-red color of a ruby necklace was said to possess protective properties that repel evil thoughts and safeguard a peaceful life. Symbolic of wealth, wisdom, and power, this gem has long been considered the stone of kings.

With colors ranging from pink to burgundy, vivid red rubies are the most valuable and highly sought after. Some gems, such as Burmese rubies, are coveted for their rarity and pigeon’s blood color, making them the most valuable in the world. As with most gemstones, color, cut, clarity, and carat weight affect the value; This is not where it ends. Place of origin, along with its status as a heated or natural ruby, dramatically impacts its worth.

The ruby is one of only four “precious stones” remarkable for their quality, rarity, and beauty. All other gemstones are considered “semi-precious.” This durable gem is a variety of the mineral corundum, which ranks 9 out of 10 on Mohs’ mineral hardness scale. Second only to diamond in hardness, the ruby provides the ultimate durability in fine jewelry.

With such beauty and rich history, is it any wonder ruby jewelry remains so coveted? Many are attracted to the inner red flame igniting love, passion, and energy. Others are drawn to the mystical protective properties, promoting good fortune. Whatever the appeal, you can be sure the ruby gemstones’ reputation and allure are here to stay.