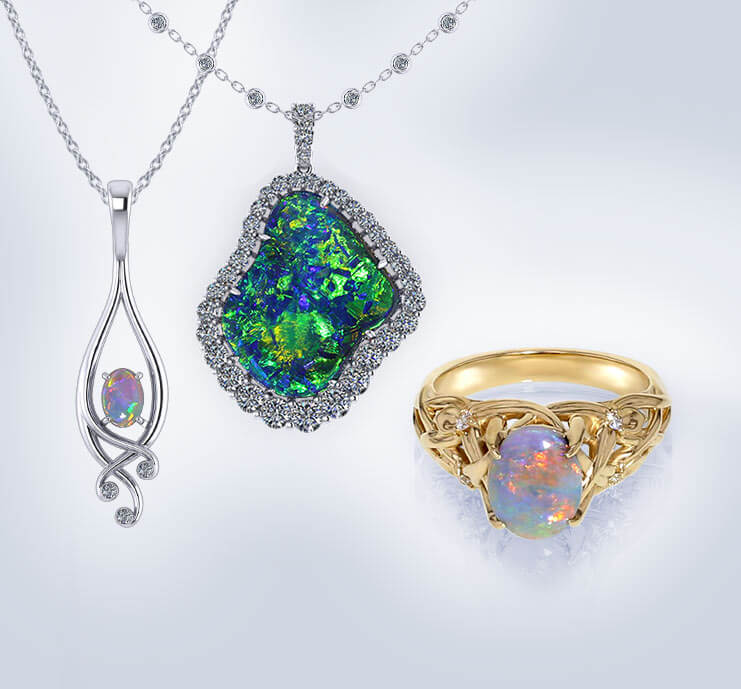 Design Your Own Opal Jewelry

Prized for their rarity, beauty, and value, opals are unlike any other gemstone found in nature. Long considered a good luck charm, its incredible spectrum of colors is said to contain the virtues of all other gems. Each distinctly different from the next, natural opals are available in such a variety that every gemstone enthusiast can appreciate.

Recognized as the birthstone for October, opal jewelry is known to have been worn by royalty and coveted throughout antiquity. Once considered a talisman, opal pendants believed to possess supernatural powers. Named the national gemstone of Australia after discovering vast deposits in the 19th century, the Australian opal is the most precious found today.

The Lightning Ridge area is specifically known for its black opals, prized to be the rarest of all. Other types range from fiery red Mexican to golden Ethiopian, onto the unique look of Boulder formed within rocks in nature. Still, the underlying dark body of black opals causes an intense saturation of color unlike any other, making them by far the most valuable.

Ranging from precious to common, the characteristics of each opal depend on the conditions in which they form. Common, typically refers to hazy, milky white to blue-green tones, while precious opals display a much more iridescent play-of-colors. From transparent and translucent to opaque, the background may present brown, black, white, grey, green, and beyond. Since visible light cannot pass through its unique structure, this causes an extraordinary light diffracting phenomenon, unlike any other gemstone.

Uniquely categorized as a Mineraloid, opals distinct hydrated-amorphous structure is not crystalline like standard minerals. Its surface is shaped and polished rather than faceted as with other gems. From oval to freeform, cut is determined by each stones’ distinct set of characteristics. With its delicate surface and sensitivity to heat, it is essential to leave handling and care to an experienced jewelry professional.

Precious opals offer an exceptional iridescence that sets them apart from other gems. Each jewel changes with every glance, whether it displays a colorful glow or more aggressive flashes of fire. No matter what version appeals to you, opal gemstones’ wonder and rarity make it an attractive choice when selecting a one-of-a-kind feature stone.