Custom crafted by the artisans at Jewelry Designs for over 40 years.

Custom crafted by the artisans at Jewelry Designs for over 40 years. 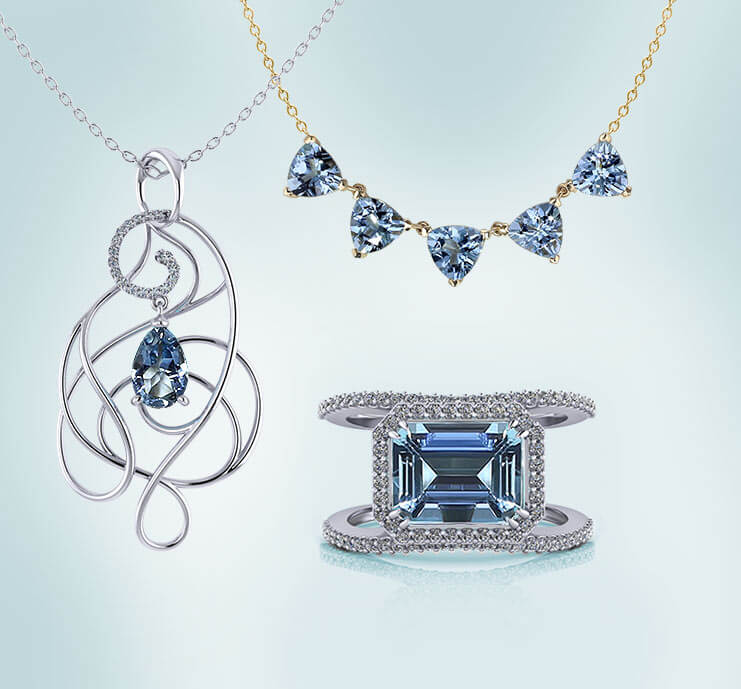 Design Your Own Aquamarine Jewelry

This “gemstone of the sea” was named aquamarine, inspired by landless skies and oceans below. Symbolic of purity, spirit, and the soul, its unparalleled clarity is reminiscent of clear blue water. As cool and soothing as they appear in natural sunlight, this evening gemstone can also sparkle and gleam under the dullest of lights. Unpolluted tropical blue aquamarines have long fascinated mineralogists and gem collectors.

Found across the world, this soft pale blue to intense green-blue gem is most abundant in Brazil. It comes from a variety of the Beryl mineral, like the emerald, morganite, and more. Natural aqua tends to have great clarity, adding to their scintillating sparkle and brightness. The durable gem ranks 7.5-8 on the mineral hardness scale, making aquamarine rings a great option. Stones may be faceted or cabochon cut. They can even exhibit a rare cats-eye phenomenon. Larger stones are plentiful, so size does not hold as much value as with other gems. Treatment is common practice to enhance this gemstone’s natural beauty.

The rare Santa Maria Aquamarine has a color shade of its own. This gem is classified by a deeper, more vibrant blue than usual. Since clarity, depth, and purity of color determine value, the Santa Maria Aqua is highly sought after.

The first use of this gem in jewelry dates back to 500BC. Aqua, meaning water, and Marina meaning sea, this mystical stone is a legendary “sailors’ gem.” Superstitious seafarers wore aquamarine necklaces as a talisman to protect from shipwrecks and seasickness. During storms, sailors threw this gem overboard to calm the gods. Legend believed it to be strongest after submerged underwater on a full moon. Tales of mermaid treasure and healing powers were common lore.

This calming heavenly blue “Divine Stone” was worn as an amulet during meditation. Long carried for protection in battle; some still use this gem to safeguard from modern-day legal battles. Both the birthstone for March and the Scorpio sign, Aqua is believed to invite faith, courage, and protection.

Aquamarines are remarkable for their unmatched beauty, rich legend, and lore. Reminiscent of water as the origin of all life on earth, this gem offers an unspoken connection to mother nature itself. Significant for friendship, happiness, and prolonging relationships, aquamarine jewelry makes the perfect anniversary gift.